Still We Rise: Thousands Gather Downtown to March and Fight for Justice and Change

Over 40 organizations fighting for change in various areas of social justice and activism came together this past weekend for the People’s Convention at the David L. Lawrence Convention Center in downtown Pittsburgh. The two-day event kicked off on Friday with a peaceful march through the city of Pittsburgh. The “Still We Rise” march attracted over 2,000 people who marched from the Convention Center to Sen. Pat Toomey’s office in Station Square. 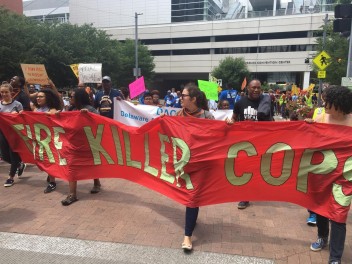 Several people hold a banner that says, “Fire Killer Cops.” In the days prior to the march, two black men were killed by police in Louisiana and Minnesota. Photo credit: Rianna Lee

The march itself was not representative of any particular issue, but was rather a melting pot of activists and issues with a broad focus on economic, racial, and climate justice. In light of recent events in Louisiana, Minnesota, and Texas, many organizations focused on police brutality and the broken criminal justice system that unfairly targets Black and Latino communities.

“This march is about bringing people together who believe that we are one – regardless of race or where you came from,” one attendee of the march said.

“Black kids are being killed by people who are supposed to protect them. Immigrants are being deported for taking care of their families and doing what they need to survive. We are marching for them,” said another attendee of the march. 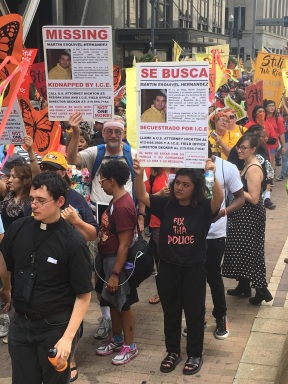 The march had a few stops along the way, each one being a symbol of oppression in the community. The first was the Allegheny County Courthouse on Grant St., to protest the arrest of Martín Esquivel-Hernandez from Pittsburgh, who was pulled from his home by U.S. Immigration and Customs Enforcement officers on May 2. He has been separated from his family for over 2 months, and could face deportation.

“Today, we are here because this Attorney General has one of our people locked up for nothing more than trying to work and do what’s right for his family… Today, we are here to talk about a solution, not for 5 million people, but for everybody,” said AJ Marin, who sat in the back of a pickup truck and mobilized groups of people for the march. Marin was joined by Martín’s wife, Alma, who spoke regarding her husband’s arrest, the injustices they have encountered, and the need for immigration rights reform. The Thomas Merton Center is currently working on a project to help seek justice for Martín and his family. (Learn more and support the cause here / Sign the petition here.)

Another stop occurred in front of the UPMC building to promote healthcare reform, and the injustices faced by the Black and Latino communities in particular. Wayne Starks of Vocal NY took the microphone to talk about the contrast in general health of black people vs. white people. Life expectancy among black people is significantly shorter than white people, and black people experience health problems and conditions, such as obesity, diabetes, heart disease, and cancer, at a higher rate than white people because of the disparities in healthcare access and affordability.

“How [are there so many] health problems when a fifth of the country’s GDP is spent on healthcare? How can so much suffering exist in a town where the largest healthcare [company in the] industry sits at the top of the tallest building?” Starks asked the crowd.

The march also stopped at the office of the District Attorney of Allegheny county, where activists from the Alliance of Police Accountability and Neighborhoods for Organizing Change spoke on police brutality, and at the Federal Reserve, where members of the Fed Up campaign spoke about much-needed economic justice.

The People’s Convention continued through Saturday, where organizers, artists, national progressive voices, and community leaders, who are driving bold and transformative social change initiatives, learned to strategize and develop a shared agenda for justice. The Convention focused on not only securing a strategy for peace and justice, but also on celebrating the leadership of people of color, women, immigrants, and young people and the power we hold to shape the future of the country.

Rianna is a summer intern for the Thomas Merton Center and a senior at Duquesne University, studying international relations and sociology. She is interested in law and public policy surrounding gender and women’s rights.

Tagged as: A: Rianna Lee, activism