Want to Learn More About Congressional Legislation and Actively Participate in Your Democracy? There’s an App for That! 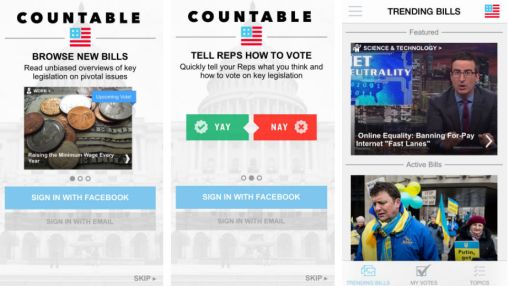 Images from the Countable app.

As much as I hate to admit it, I don’t know everything. In the vast world of social justice and public policy in general, it’s hard to keep up with all of the problems in our country, especially if you are not directly affected by them. It’s even harder to keep up with what exactly Congress and public officials are doing to remedy the problems, because, let’s face it, our government isn’t exactly always transparent.

Especially during this election season, the main question for presidential candidates, especially those who still hold seats in Congress, has been, “What will you do once you get elected?” And we should be asking these questions to predict what will be at the forefront of our new President and Congressmen’s agendas once they are elected in November. However, the heavy focus on promises made by candidates during an election campaign usually does not transfer to what our elected officials are doing once the ballot is cast. A new app called Countable is working to change this, making it easier than ever to influence Congress, keep up with issues that are important to you, and learn about legislation going through Congress in real time.

When I first discovered the app, it was advertised as “Tinder for Unsexy Congressional Legislation.” As a social justice activist, public policy enthusiast, and someone who barely has enough time in the day to read the news, let alone thorough, lengthy congressional bills, I thought it sounded intriguing enough to at least check it out. I assumed I’d be swiping through summarized bills going through Congress at the time, learning about current legislation, but not interacting with the lawmakers who have the ability to pass or reject it. I was pleasantly surprised to find that the app has great potential to change the way people interact with their lawmakers.

Signing up for the app is free and easy – all you need to give them is your address to start (but only so the app can find your representatives so you can get in touch with them). After you sign up, you can follow issues that are important to you, much like you’d follow an account on Twitter or Instagram. You can also follow politicians, see what legislation they are voting for or against, and often a quote or explanation stating why. I followed issues such as Social Justice, Civil Rights, Counterterrorism, Crime and Police, Environment, and more; pretty much anything Congress makes laws about – you can follow it in the app. If you have notifications set up, the app will notify you when a piece of legislation pertaining to any of the issues important to you has been introduced or is being voted on soon. You can vote Yea or Nay, and even write why – which is then sent directly to your representatives.

Another thing I love about this app is that the legislation is very easy to follow and understand. There is a brief overview of what the bill will do, followed by a more in-depth explanation. The app also offers a forum for other Countable users to see who is voting Yea or Nay, and why. Also featured is the status of the bill (introduced, passed, rejected, etc.) and the full-text legislation. No media bias or wishy-washy politicians with hidden agendas persuading you to support or not support legislation – just clean, cut and dry information to help you make an educated decision about what kinds of laws may affect you. The app also releases very interesting blog posts every so often regarding the current state of politics, international affairs, recently passed legislation, and more.

However, just because there is now a way to learn and speak out about legislation being introduced or voted on in Congress doesn’t mean our lawmakers will listen. Many lawmakers prefer the old-fashioned telephone call. As we move toward a more technologically-dependent world, though, lawmakers should adapt to the ways in which their constituents choose to communicate, if their opinion is truly important to them. Also, since the app is only available for those who have access to iPhones and Androids, it can potentially exclude those who do not have access to such technology.

With time, I believe this app could revolutionize the way Americans participate in our democracy. I have a lot of friends who are not interested in politics and government because they think it’s too hard to understand and follow. This app could definitely change that, and get millennials especially more interested in what goes on in our government. After all, the people that get elected in November will shape our futures, and it’s imperative to find some kind of medium to get non-biased information on laws and policies that will affect everyone’s lives.

Rianna is a summer intern for the Thomas Merton Center and a senior at Duquesne University, studying international relations and sociology. She is interested in law and public policy surrounding gender and women’s rights.

Tagged as: A: Rianna Lee, Politics