Nowhere to Turn: The Terrors of Sexual Assault in the Military

What do you do when you’re sexually assaulted and want to seek justice, but your only option is reporting it to the person that assaulted it to you? For tens of thousands of military men and women every year, this is reality.

Currently, if a woman wants to report an issue, she must use the military chain of command – even though supervisors are responsible for approximately 60 percent of all sexual harassment and gender discrimination cases. Only after a case is deemed worthy by a supervisor is it sent to trial, and even then, a large number of perpetrators walk away with no repercussions.

A woman that reports military sexual assault is 12 times more likely to face retaliation from supervisors and peers than she is to see her offender get convicted. Repercussions can come in the form of violence, threats, social isolation, verbal harassment, demotion, job loss, and other disciplinary action.

Because of these harsh facts, 8 out of 10 women who are sexually assaulted in the military stay silent. These women are often forced to stay in close living quarters with their perpetrators. They may have to rely on their perpetrator for essential things like food, health care, or help in combat.

The Military Justice Improvement Act (Senate Bill 1752) is a new bill that would allow these cases to be investigated by independent, trained, professional military prosecutors instead of supervisors. Congress was scheduled to vote on MIJA on June 14th, 2016, but this important bill was blocked by filibusters once again.

To learn more, check out this infographic and like TMC’s new “Stop Sexual Assault in the Military – SSAM” Facebook Page. 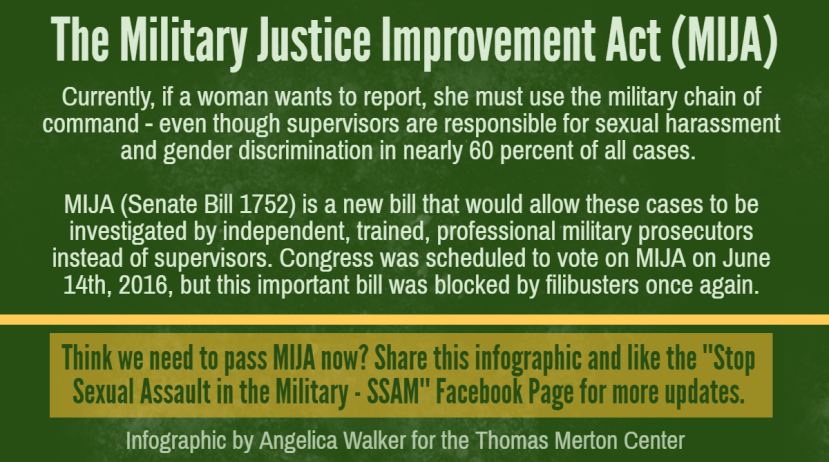