The movement to gain the vote took decades, but it finally succeeded in 1920 with the passage of the 19th amendment.

The struggle for the right of women to vote took great courage in the face of fierce opposition. Several were jailed for picketing. While in jail, many refused to do required work and went on hunger strikes.

Four Pittsburgh women who are largely unknown played a major role in the struggle for the vote. They are Nellie Bly, MRS. J.O. Miller, Jane Grey Swisshelm and Edith Dennison Darlington Ammon.

Much of what follows has also been described in the Pittsburgh Magazine, in an article by Virginia Montanez.

Jane Grey Swisshelm blazed a trail during her lifetime in the 19th century, including a harsh marriage in which her husband’s expected subservience was the catalyst for her advocacy.

Her experience led to her devotion to women’s rights, especially property rights. She was a staunch abolitionist who served as a frontline nurse for the Union during the Civil War.

She started her own abolitionist and women’s-rights weekly, the Pittsburgh Saturday Visitor. She was the first woman ever in the Senate press gallery and she started two newspapers.

In St. Cloud, abolitionists threw her printing press into the river. At this she wrote, “Dying is not difficult, yielding is impossible,” and then started a new newspaper.

Born in 1815, Jane was well ahead of her time. She was the first woman hired by Horace Greeley of the New York Tribune. She was a fiery journalist, publisher, abolitionist and women’s rights advocate. She owned a series of newspapers. The Spirit of Liberty, in 1857, promoted an end to slavery and women’s rights.

Swisshelm retired to the Pittsburgh country estate she won in court from her husband. This estate, named Swisshelm, is now Swissvale.

Nellie Bly was the pen name of Elizabeth Cochran. In 1885, the twenty-year-old wrote a piece on equal pay for women and was hired by the Pittsburgh Dispatch. She was a pioneer in her field of investigative journalism.

Faking insanity, she was admitted to an insane asylum. She then wrote a first-hand account of the harsh treatment she received. She became an advocate for the poor and under-served.

“A girl was engaged to fill a position that had always been occupied by men, who, for the same work, received $2.00 a day. Her employer stated that he had never had anyone in the same position that was as accurate, speedy, and gave the same satisfaction; however, as she was ‘just a girl’ he gave her $5.00 a week.”

An adventurer, inspired by Jules Verne’s Around the World in 80 Days, she outdid Verne by making the trip in 72 days. 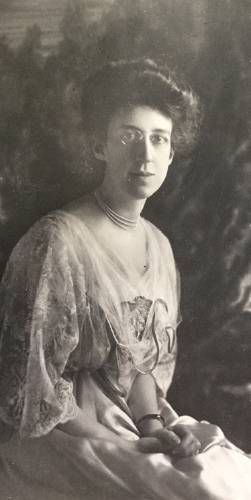 Because women almost always were referred to by their husband’s first and last names, she was referred to in news stories as Mrs. John O. Miller or Mrs. J.O. Miller.

She chaired Pittsburgh’s suffragist movement during the most crucial years of the right-to-vote fight. She spoke at many local functions in support of enfranchising women and was a regular at scheduled debates regarding the subject.

In 1915, four years before women would officially get the vote, she wrote an appeal to voters on behalf of the Woman Suffrage Party. She led the party in 1919 when the Pennsylvania Legislature voted to pass the Suffrage Act, the first state to do so.

After the historic vote, she presented the governor with an engraved memorial in gratitude. On it was her given name, recorded for posterity, with no indication of her marital name. 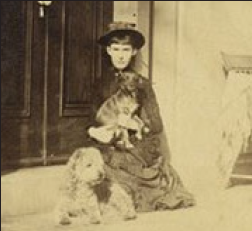 PHOTO FROM THE FARLINGTON FAMILY PAPERS, UNIVERSITY OF PITTSBURGH

Edith Ammon led the fight to save the historic Fort Pitt Block House. As a leader of the Fort Pitt Society of the Daughters of the American Revolution, Edith and other members rose up in the face of powerful opposition, including Henry Clay Frick and the Pennsylvania Railroad.

Although women couldn’t vote, Edith lobbied tirelessly in Harrisburg on behalf of the society to save the small slice of history. Fearlessly, she stood up to the powers that be.

Addressing a roomful of state senators regarding what had become known as “Mrs. Ammon’s Bill,” she scolded, “Have you no history? Have you no pride?”

While not an active Suffragist, she inspired many women who worked for the vote.

Molly Rush is a Co-founder of the Thomas Merton Center and a member NewPeople Editorial Collective.