EDITOR’S NOTE: FOR THE LAST SEVERAL YEARS, PITTSBURGH’S DEPARTMENT OF MOBILITY AND INFRASTRUCTURE (DOMI) HAS FLOATED A PROPOSAL TO BUILD A ROADWAY THROUGH SCHENLEY PARK, ALONG JUNCTION HOLLOW TRAIL. THIS PROJECT, DUBBED THE “MON-OAKLAND CONNECTOR,” HAS BEEN PLANNED IN TANDEM WITH AN IMPORTANT STORM-WATER REMEDIATION PROJECT IN LOWER GREENFIELD AND THE FOUR MILE RUN COMMUNITY, WHICH WOULD ADDRESS THOSE NEIGHBORHOODS’ URGENT FLOODING ISSUES. OVER THE PAST TWO YEARS, THE CITY HAS PROPOSED A VARIETY OF TYPES OF PRIVATELY-OWNED, PUBLICLY-ACCESSIBLE TRANSPORTATION MODES TO OPERATE ON THE MON-OAKLAND CONNECTOR ROADWAY, INCLUDING SELF-DRIVING MICRO-BUSES, E-SCOOTERS AND “PODS.” THIS PROPOSAL HAS GENERATED WIDESPREAD OPPOSITION BY RESIDENTS OF PANTHER HOLLOW, FOUR MILE RUN, AND HAZELWOOD. RESIDENTS IN THAT CORRIDOR HAVE EXPRESSED CONCERN ABOUT THE IMPACTS OF A ROADWAY ON THE STORMWATER REMEDIATION, AS WELL AS ON THE SAFETY AND ACCESSIBILITY OF THEIR ROADS AND SCHENLEY PARK, AND HAVE CALLED INTO QUESTION ITS UTILITY AS A PUBLIC TRANSPORTATION SOLUTION FOR HAZELWOOD GREEN AND EXISTING NEIGHBORHOOD TRANSPORTATION DEFICITS.

At the June 20 public meeting about the 4-Mile Run Stormwater Improvement Project and Mon- Oakland Mobility Project, residents had many open or unanswered questions. We compiled a list from several neighbors in The Run in advance of the meeting. You received a copy of these questions at the meeting, and they are included below.

The URA (Urban Redevelopment Authority ) document referenced in question #8 was acquired through a Right to Know request submitted on December 5, 2018. It clearly shows that the URA’s vision for the stormwater project provides that “major transportation options under discussion” should take precedence. This contradicts repeated public statements from you and other officials, and raises serious concerns for us because of our neighborhood’s flooding problem.

Residents have been pleading for many years with city officials to address the stormwater and sewage flooding their streets and homes.

Multiple experts in the fields of infrastructure and stormwater management have told us that forcing a roadway into the stormwater plan is likely to harm flood control. As Pittsburgh Water and Sewer Authority (PWSA) Chief of Program Management Alex Sciulli stated in your joint presentation at the June 20 meeting, development—which replaces green space with hard surfaces such as asphalt that don’t absorb rainwater—is a major cause of the flooding we’ve experienced.

If you read the April 22 Post-Gazette article “City officials, residents disagree on transportation service from Hazelwood to Oakland,” you’ll see that unnamed city officials admit there was no funding or plan for flood control until after residents learned of the proposed roadway in the August 29, 2015 and strongly objected.

As you have had our questions since June 20, we expect and would appreciate full and complete responses to each one.

Residents of The Run and Supporters

We’ve been told that the watershed project and the roadway project are separate, yet being done “in tandem.” That level of coordination requires detailed plans. When will you share full details so that resident-approved independent experts can evaluate them before construction begins?

At the January 2018 public meeting, Michael Baker Corporation presented six possible routes (including five offered by residents). DOMI director Karina Ricks expressed a preference for the Swinburne route but said it was not viable because of the landslides on Swinburne. Why is Swinburne unviable for smaller lighter AVs, yet currently open to at-times bumper-to-bumper traffic including cars, trucks, UPMC shuttles, emergency vehicles, and school buses?

running right along the bottom of Swinburne, which has experienced landslides in the past and present, and which DOMI designated “unviable” as a route. What is the true reason you are so attached to the route through Schenley Park? Why do the private partners want this land so badly?

According to sources, there is a discussion happening behind the scenes about trying to buy out residents who live along Four Mile Run/Boundary streets— whose basements always flood when there is heavy rain. Is it true that you are going to attempt to buy or force those folks out through those or other means?

In 2015, public officials stated to the press that the city would go to court to overturn Mary Schenley’s deed in order to seize the publicly owned and protected property of Schenley Park. Are you still planning on going to court to force that outcome?

At the September 2018 meeting, PWSA head Robert Weimar stated, “We only have one chance to get this right” regarding the storm-water plan’s success. We agree, and expect access to detailed plans so that an independent, resident-approved expert can evaluate them before construction begins. When will you provide those plans?

Will you provide a list of all “project partners” with their contact information—email addresses and phone numbers?

Multiple experts have told residents that forcing the roadway onto the watershed plan will compromise flood control. A URA document titled “Project Narrative for Heinz Endowment” states, “Measure of success: We will produce several construction alternatives … and couple them with the potential design options that will not preclude any major transportation options under discussion.” In plainer language, this paragraph says that a successful flood control plan won’t interfere with the proposed roadway—in other words, the road takes precedence. This directly contradicts repeated public statements made by you [K Ricks], PWSA, and other officials. Given the true priorities behind both projects, what guarantees can residents expect regarding the success of the watershed improvement plan? When will a community benefits agreement with those guarantees be enacted?

How was it determined that the route through two neighborhoods and Schenley Park is the only viable route? Swinburne would have to be stabilized to prevent it from collapsing onto the proposed roadway. So why spend an additional tens of millions of dollars to build a new road instead of using Swinburne as the route?

On April 18, some residents of The Run, along with Pittsburghers for Public Transit and the Penn Plaza Support and Action Coalition, sent Mayor Peduto an open letter. We made specific, actionable demands to actually include the public in this so-called public process concerning the Mon-Oakland Connector— things like announcing the meetings at least 14 days in advance, revealing the total amount of public funds spent so far, and formatting the meetings so that all attendees can hear all the questions and answers. When will we receive a formal response, and why are you continuing to take up most of these meetings with presentations and breakout sessions?

By choosing automonius vehicles (AV), you are eliminating jobs, thus reducing the tax base. How will the City make up for this loss of revenue and pay for basic services like roads, bridges, infrastructure, etc.? Will robots pay taxes?

The Planning Commission approved a last-minute tripling of residential density in the Hazelwood Green plan over objections by the Greenfield Community Association and the Run Resident Action Team. Karina Ricks admitted in 2017 that if Amazon accepted Pittsburgh’s bid, the Mon-Oakland Connector would be inadequate for the increased number of users. Why are you investing public money into a roadway that is already obsolete before it’s even built?

Isn’t it a conflict of interest that some of the people involved in decision making about the roadway and storm-water projects stand to profit from developing Hazelwood Green?

We have the agenda from a 2000 “community outreach project” meeting titled “The New Junction Hollow Vision.” The agenda advocates for a short, intense “charette” process—that means a meeting of all stakeholders where conflicts are worked out. But the meeting involved only residents of Oakland and the Oakland Community Council. Hazelwood Initiative is mentioned but not Panther Hollow or The Run—the neighborhoods that are actually located in Junction Hollow, the communities that would be affected most. Do the Oakland organizers of this meeting still think Junction Hollow belongs to them, and that they can decide its future? Why would they not include the communities of Panther Hollow and The Run?

A URA document titled “Exhibit 1” states, “The implementation of the Oakland Transit Connector model can address a majority of these barriers and will open the opportunities for continued economic growth across Oakland and into adjoining communities.” The barriers: People already live here. There’s a public park here. Development can only address these “barriers” by eliminating them. No one consulted those “adjoining communities” about the Mon-Oakland Connector before deciding to proceed with it. And during the series of public meetings last year, DOMI filed another grant application connected to the roadway without telling residents. City officials have lamented the continuing distrust around this project, but how can they be surprised?

Some people would like to attend these meetings but can’t because they are taking care of kids. Will you use part of the Knight Foundation grant to facilitate their participation by providing kids’ activities and supervision for future meetings?

DOMI’s presentation for the February 2018 meeting included a chart that gave “Autonomous Microtransit” a higher positive ranking than conventional shuttle buses and improved Port Authority bus service. This despite the fact that no data supports the assertion that AVs have a greater ability to “deliver in the near term” or “promote sustainable mobility and development”—in fact, the proposed Mon-Oakland Connector requires completely new infrastructure and a new fleet of vehicles. Why is AV being so aggressively put forward as the solution and whose interests does this serve?

What will happen to the Mon-Oakland Connector fare system after the fares are no longer subsidized (after 2 years)?

Junction Coalition believes that Pittsburgh needs to solve its affordable housing, corruption, and injustice problems instead of inflaming them with inequitable development. 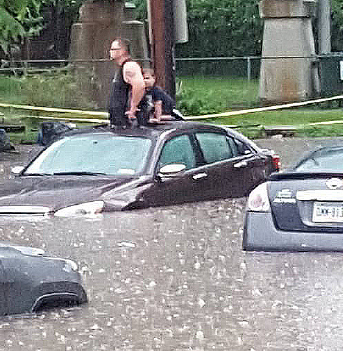 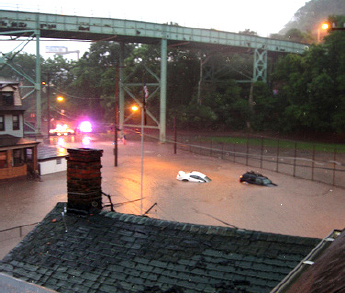 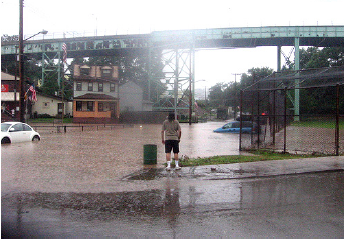 PHOTOS ARE FROM VARIOUS YEARS OF FLOODING IN THE RUN.