2018 was the year for women in politics in Pennsylvania. In our area, Sara Innamorato, from the city, and Summer Lee, from Swissvale, were elected to the State House of Representatives and Lindsey Williams from West View was elected to the PA State Senate, Four women from the eastern part of the state were elected to the US House of Representatives. These victories are the work of many people, in movements that formed outside the usual political infrastructure. Lara Putnam, who participated in the activities, and teaches history at the University of Pittsburgh, had the good sense to document it.

Lara, although she speaks of her “small part” in the movement, has written at least four articles on the topic, the longest one written with her colleague, Harvard University political scientist Theda Skocpol. The article, “Middle America Reboots Democracy,” appeared in Democracy, a Journal of Ideas. It is readable, encouraging and exciting.

Taking a historical approach, the authors go back to the time after Obama’s election. “In 2008, a campaign-orchestrated mass movement drove Barack Obama into the White House. But that was left to rot. ‘Organizing for Obama’ went through various iterations, but none kept the citizen momentum going or channeled the hands-on participation of 2008 into a newly active, widely present Democratic Party.” I can vouch for that; I went to the first volunteer effort after the election, an uninspired event that called for joining an established group in an established food distribution, while lacking the spirit and camaraderie of the Obama campaign.

We all know what happened next. As Lara and Theda point out, the far right rose up. Over 1000 Tea Party groups formed in 50 states, won local and state elections, took over the U.S. Senate, and created a conservative Supreme Court, thus bringing results that we will all live with for a long time. According to the article, the Democratic failure to match their efforts produced massive state house losses, some 900 seats between 2009 and 2016. The Democratic Party, scrambling to recover, began thinking in the usual terms, about PACs, and political strategy within the established party structure.

But other people were talking about the direction of the country, over the water cooler, at the gym, at PTA meetings and among their friends. They spoke of the need for transparency in government, more action, less talk, and in general more progressive legislation. The people were mostly women, mostly from the suburbs, some newly retired. They had some differing views, but enough common ground to come together and plan strategy for making change, which was their goal. Not unlike the Tea Party, they began to learn the electoral ropes. In the New Republic, Lara and Theda wrote, “From coal-country capitals like Washington, Pennsylvania, to well-heeled Westchester, New York, grassroots leaders are winning seats on county and state Democratic Party committees and calling for more transparency, more outreach, more action.”

The women’s insightful comments on the diversity of viewpoints brought to mind the two elections of Conor Lamb. After his first victory in a special election, and before his second victory in the newly formed 17th Congressional district, Lara wrote, “Lamb’s campaign was powered by two core Democratic constituencies routinely portrayed as irreconcilable: college-educated suburban progressives and traditional blue-collar labor. They were not reconciled by a ‘magic’ message that somehow brought out the inner Republican in all. From the perspective of those in the trenches (and I was there alongside many others who did much more), it was not the message or the messenger that made [the election] different in 2018 from the past. It was the organizations and conversations that surrounded them.”

“The individual running for office may not be your dream candidate,” the women wrote, “but the newly formed coalitions understood pragmatism, and united behind the best candidate that could be elected. It is often the connectivity and the community, rather than the issues, that bring people together in support of a candidate.”

I asked Lara how people might come together around the issue of race and marginalized groups. “The general pattern is that grassroots groups are drawn from college educated woman who have the ability to devote time toward political activity and recognize that this is a privilege. Some groups are not as socially and economically diverse as one would like. The thoughtful response is to become allies, participating in events and marches organized by black women or transgender people, and to become active in fundraising for the candidates and projects they support.”

And for a final word, how about this from the two women? “For those wondering who is going to rebuild the foundations of U.S. democracy— assuming the national
guardrails survive—the answer across much of the U.S. heartland seems clear. The foundation rebuilders in many communities across most states are newly mobilized and interconnected grassroots groups, led for the most part by Middle America’s mothers and grandmothers. They see the work to be done and are well into accomplishing it.”

Articles written by Lara Putnam and colleagues can be found by searching her name in the websites for the New Republic, (“Women Are Rebuilding the Democratic Party”) and the Democracy Journal (“Middle America Reboots Democracy, There Is No Civil War,” and “Who Really Won Pa 18?”). 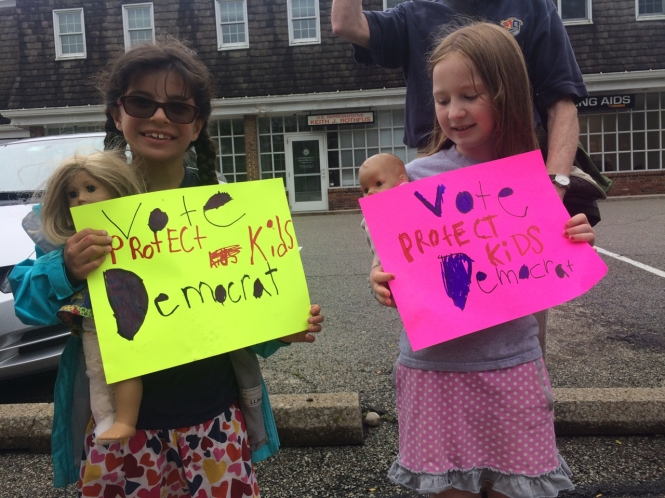 Bette McDevitt is a member of the Editorial Collective and the Raging Grannies.