The Our Water Campaign is a broad community effort to ensure safe, affordable water while confronting the infrastructure, debt, and billing crises recently facing the Pittsburgh Water and Sewer Authority (PWSA). And the Campaign believes a lot has been accomplished over the past year or so.

But that doesn’t mean the nine activist and environmental organizations running the campaign, which include the Thomas Merton Center, are feeling at all complacent. Big challenges remain, mainly involving keeping PWSA wholly public, and safe water accessible to those most at-risk of “shutoffs,” such as lowincome families, seniors, and people with disabilities.

Pressures to go private have been mounting in recent months, with People’s Gas and Pennsylvania American Water Company both openly expressing a desire to take over PWSA’s operations and Mayor William Peduto at least appearing to favor a P3 (a private-public partnership) in order to implement large-scale repair and replacement of Pittsburgh’s water and sewer infrastructure.

Mayor Peduto argues that the more than $2 billion needed for infrastructure is too much of a burden for PWSA’s 80,000 ratepayers to take on, the TribLive news site reports, and that a private company could shoulder some of those costs. The Our Water Campaign doesn’t see how such a partnership could possibly lessen ratepayers’ burden, given a company’s need for profits and the higher interest rates that accompany whatever private financing the company would obtain. Whether significant increases in water rates begin now, or a few years from now, they seem inevitable, and will be larger under privatization, the Campaign contends.

In fact, PWSA is already seeking a 16.5% rate increase from the Pennsylvania Public Utility Commission for 2019, and must submit a long-term infrastructure plan as part of that request. Perhaps that plan should include seeking a variety of funding resources, beyond bond issues. Spending on water infrastructure by the federal government has been dropping for the past 30 years, and it’s time that trend was reversed through Congress passing an infrastructure bill that includes significant support of municipal water systems. And here’s a reasonable question to ask: If Allegheny County sales tax revenues can be used to build professional sports facilities, then why can’t they be used to build something as vital to the region’s economy as water and sewer infrastructure?

PWSA’s previous partnership with Veolia North America is also driving the Our Water Campaign’s deep skepticism about any form of privatization. Veolia’s contract greatly incentivized cost-cutting (Veolia “could keep 40% of every dollar it saved the city,” Jordana Rosenfeld wrote in The Nation), while leaving infrastructure maintenance completely out of the agreement. Consequently, 23 employees possessing much-needed experience were laid off, and cheaper caustic soda replaced soda ash as a means to prevent pipe corrosion. The ensuing spike in lead levels brought the state Department of Environmental Protection down on PWSA’s head.

“Government officials in Flint, Michigan and Plymouth, Massachusetts,” Rosenfeld adds, “have also charged Veolia with negligence in the wake of their own water and sewer disasters.”

The Our Water Campaign supports PWSA’s current rate hike request, and recognizes the need for more hikes in the future. To counter the impact of that necessity on shutoff-vulnerable customers, the Campaign wants the winter moratorium on water shutoffs extended to year-round, and eligibility for the Customer Assistance Program expanded to households with incomes at 250% of the poverty line, as opposed to the current 150%. Again, the Campaign is convinced that such support is more likely to exist if PWSA remains completely public, and the obligation to make a profit simply doesn’t exist.

What lies in the near future for PWSA and the Our Water Campaign? Mayor Peduto has told TribLive, “The city would seek proposals from private companies at some point during the last four months of the year,” and after he receives a proposal from PWSA on how it plans to “eliminate all lead water pipes and guarantee the city safe drinking water for the next 50 years.”

Our Water Campaign continues attending and monitoring PWSA board meetings, held the last Friday of every month, in order to keep pushing for the various affordability measures it is seeking. The Campaign continues its ongoing communications to the mayor’s office and individual council members. That communication recently paid off when Council Member Erika Strassburger’s request resulted in a “post agenda meeting” on water privatization, held in Council Chambers the afternoon of September 27. The meeting featured such speakers as Donald Cohen, Director of In the Public Interest. Cohen met with Mayor Peduto this past July, in part to explain the possible pitfalls of publicprivate partnerships involving water systems. 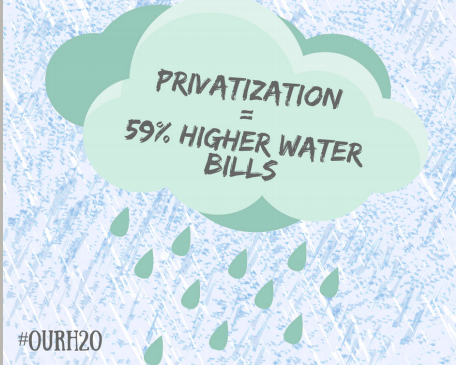 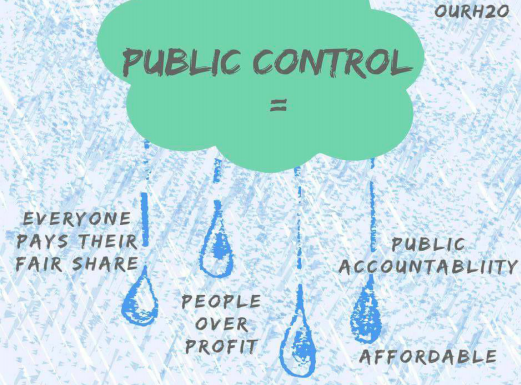