Why We Don’t Love Amazon HQ2; Let Us Count the Ways

A recent Elon University poll concluded that 83% of Pittsburghers “strongly or somewhat” support Amazon placing a second headquarters in their city. No doubt, the oft-quoted figures of 50,000 jobs and $5 billion in new investment have a lot to do with the prospect’s popularity. How could anyone think such an infusion of money and “good” jobs would be bad for our region?

Well, the Thomas Merton Center and other activist organizations are far more than skeptical that Amazon HQ2 means unmitigated “happy times” for Pittsburgh and southwestern Pennsylvania. Why? We have our reasons; several of them, in fact.

First of all, Amazon has not won our trust by creating a process that essentially pitted hundreds of geographical regions, and now 20 “finalists,” against each other. Such an approach makes it all too obvious that the company is trolling for big tax breaks, even though analysts commonly observe that such incentives are not the deciding factor when site selections are made.

The Philadelphia Inquirer has reported that the state of Pennsylvania is offering Amazon $1 billion in tax incentives to locate in Philadelphia or Pittsburgh, two of the company’s finalists. It’s also rumored that both cities have included billions in payroll tax exemptions in their proposals, proposals county and city leaders refuse to disclose to citizens who already pay their share of state and local taxes. Such tax incentives, Laura Wiens of Pittsburghers for Public Transit (PPT) points out, would be better applied “to thousands of locally owned, minority-owned businesses, for instance, and that would do a better job of stimulating the local economy and keeping wealth in our community.” 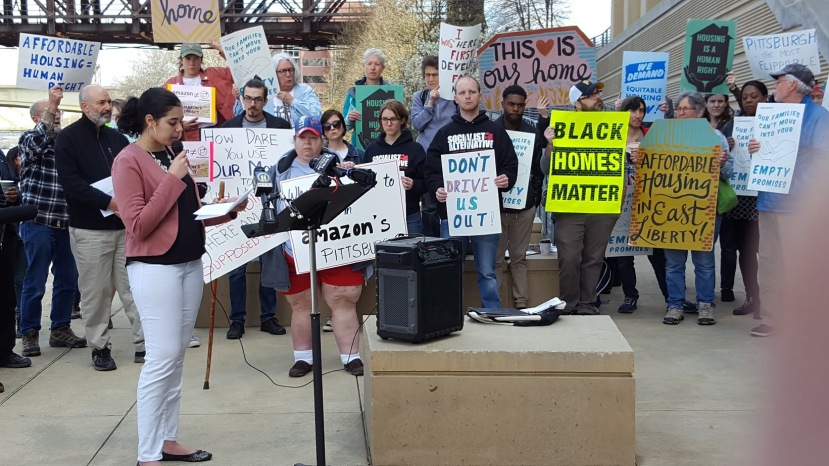 (Photo Caption: Talia Smith speaks at the Press Conference outside of the P4 Conference, highlighting the problems with locating Amazon HQ2 in Pittsburgh. (Photo: Kim Dinh)

In addition, Amazon is already receiving substantial government subsidies for their “fulfillment centers” in Pennsylvania. The Intercept recently reported that Pennsylvania localities have already granted Amazon “an estimated $24.8 million in subsidies [for] 13 warehouses employing around 10,000 workers” —over 10% of whom have such low wages that they are enrolled in the federal Supplemental Nutrition Assistance Program (SNAP), another form of government subsidy. That same Intercept article observes that while Amazon is only the 19th largest employer in Pennsylvania, the company ranks fifth in the amount of employees receiving food assistance.

Second, it is obvious to just about everyone that selection of Pittsburgh for Amazon HQ2 will put huge upward pressure on the region’s housing costs, where there is already a shortage of more than 17,000 affordable housing units in the city alone. Activist Carl Redwood notes that on average three black people and 1.5 whites are leaving Pittsburgh every day because they can’t afford the rents and home sale prices.

To get a sense of what speculation in housing and land values might do to Pittsburgh, one has only to look at Seattle, home of Amazon HQ1. “In Seattle,” states a recent release authored by PPT and the Merton Center, “housing prices have increased 57% in the last six years to $2100/month. In the last 12 months alone, median home prices have increased 21% up to $741,000.” (Pittsburgh’s currently is $135,465.) Real estate speculation is already occurring in Hazelwood, location of Hazelwood Green, one prime possible HQ2 site.

Amazon claims it would like to prevent the Seattle experience from happening at its second headquarters, but just how it can be prevented is unclear. Because Pittsburgh has no inclusionary zoning or rent control, Laura Wiens contends, once the speculation gets rolling, “both the mayor and Amazon will become ancillary.”

A third reason for our HQ2 wariness is the region’s lack of infrastructure, particularly when it comes to public transit. Seattle has two transit agencies with multi-billion budgets, while Pittsburgh has the Port Authority, with an operating budget of $419 million. Amazon HQ2 will strain public transit in two ways—one involves moving Amazon employees to their various work sites; the second involves transporting low-income people much greater distances than is currently the case. As we’ve seen, rising housing costs are already driving more and more low-income people out of the city, and that exodus would explode with Amazon HQ2. As Laura Wiens points out, there is a direct relationship between durations of commute and the ability to pull one’s self out of poverty. HQ2 could greatly exacerbate current economic inequality.

Finally, it is reasonable to wonder about the quality of those 50,000 jobs Amazon has promised. People get big-eyed when they see Amazon’s 45,000 Seattle employees making an average of $110,000 plus. They need to remember that the median pay for all the company’s employees is around $28,500, because the great majority of them are in dangerous, physically demanding warehouse jobs that pay, on average, “about 9 percent less than the industry average” for warehouse work, according to The Intercept. Amazon has already told Allegheny County Executive Rich Fitzgerald that “possible distribution centers near the airport” are being considered, the Pittsburgh Post-Gazette recently reported.

Amazon is noted for “tracking how fast its warehouse workers can pick and package items from its shelves,” as Business Insider recently put it, “efficiency” run amuck. The National Council for Occupational Safety and Health has “found that seven workers have been killed in Amazon warehouses since 2013” observes an article on Gizmodo, and the Council recently ranked Amazon as among their top 12 companies “that most put their workers at risk.”

A heightened awareness of all of the above might significantly lower Pittsburghers favorable attitude towards Amazon HQ2. Five years down the road Pittsburghers might feel luckier if they were NOT chosen for the dubious honor of hosting the company’s second headquarters. The question to ask might be this: Do we want to be a second-rate Silicon Valley or a first-rate Pittsburgh?

Neil Cosgrove is a member of the NewPeople editorial collective and the Merton Center board.