Early on February 8th, over 350 students from all across the Pittsburgh Public School district gathered in Market Square to protest the confirmation of Betsy DeVos for Secretary of Education. They then proceeded to march to Station Square to protest at Senator Pat Toomey’s office, who voted in favor of DeVos despite receiving thousands of calls and emails urging him to do the opposite.

Students of Color from various intersectional backgrounds, including LGBTQ+ identities, organized this march. The central organizers are all juniors from Pittsburgh CAPA High School. As a CAPA alum, I am so proud to see young people continue to represent the school with courage and honor through a social justice mission.

One of the organizers commented on the intersectional leadership of the march, saying, “We sought to uplift the point of view of those most oppressed and underprivileged in the school system,” and identified at-risk populations as “ESL students, disabled students, Black students, poor students,” to name a few.

According to another student organizer, “We planned it in less than 24 hours through texting and social media.” As anyone with experience organizing knows, this is an incredible accomplishment. Getting 350 people to show up to anything is challenging. The fact that this march was assembled so quickly and efficiently demonstrates Pittsburgh students’ commitment to their education. All social justice activists should draw inspiration from these students’ powerful organizational skills and inclusive, intentionally intersectional leadership.

The student organizers passed along the following list of demands to me:

“With the recent confirmation of Secretary of Education Betsy DeVos, many public school students are concerned about our futures and the safety of our public education system. It concerns us our own Senator Pat Toomey confirmed Secretary DeVos while many of his constituents reject her policies and her values. As Pittsburgh public school students, and on behalf of all Pennsylvania students, we demand that:

These demands and this action are the first steps in a student lead resistance. We will not give in and we will not give up. We demand that our representatives represent our values as students, as Pennsylvanians, and as people.”

I found the march to be inspiring and beyond reproach, but unfortunately, not everyone felt that way. Below is a poll posted by the WTAE-TV Pittsburgh Facebook page. The poll asks, “Should Pittsburgh Public School students who protested this morning be reprimanded for skipping school?” The embedded screenshot was taken after many students shared and commented on the post to try to make the results more favorable to the student organizers and participants. Before supporters took notice, however, most of the comments posted were nasty and condescending. One person responded, “They are complaining about their education, meanwhile, they are skipping class. Protest after class if you feel the need. Skipping class to protest is defeating the purpose.” Another said,  “They are using it as an excuse to skip school. I am sure 95% of them have no idea who she is, let alone what her job is. I can tell you, I could have cared less about the secretary of education when I was in HS, but if it was a reason to be off, I’d sign up! …. and I was a very good student in an excellent district.” 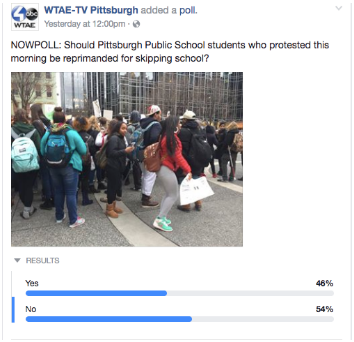 One student organizer has a thoughtful response to criticism about the march: “If we don’t demand to be heard, there may not be a public school to be absent from.” Another organizer remarks, “When we don’t fill the desk at schools we are making a statement. Our presence is missed! You should be mad that our Education Secretary is unqualified! You should be mad that our state representative did not answer any phone calls and didn’t care to respond to the people! If you’re not upset you are the problem!” As one young woman mentioned while speaking during the march, “When they don’t answer, we have to come to them, we have to let our voice be heard.”

In addition, some students felt that the WTAE poll was discriminatory and an example of yellow journalism. It features a photograph that depicts mostly Black students and is therefore framed in a very leading way that encourages heightened discipline of Black folks. This assumption allows the school-to-prison pipeline to operate so efficiently, by making discipline against Black students an automatic consideration. Some commenters used words like “hoodlums” to describe the protesters, which is a very racially charged description.

Many of those commenting assumed that students were only protesting to get out of class, that they would go after school if they really valued their education, that they were uninformed. To those skeptics, I must ask–what teenager would wake up so early, and travel downtown in the freezing cold to skip school? A few blocks away from CAPA High School, where most of them attended? As a recent PPS grad, I can assure you that we try not to leave the warmth of our beds if we decide to miss school in the winter.

If seeing the pictures of these strong, powerful students fills you with resentment instead of joy, you need to reassess your values. As one of the organizers notes, “This is just the first step.” With such highly motivated and talented young people mobilizing, you have many more actions to look forward to.

This video almost moved me to tears. Please watch and celebrate these brilliant young souls protecting their right to a public education.

Check out the #pghstudentstrike hashtag on Instagram to see more!

Mollie March-Steinman is currently self-designing an Economic Justice major at Chatham University. She is passionate about promoting peace and justice for all. Mollie is an intern with the NewPeople Editorial Collective.