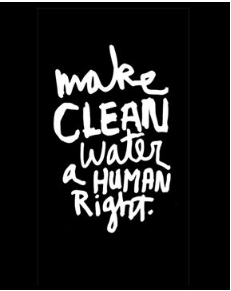 Despite the recent media attention given to poisoned water throughout our country, environmental racism is nothing new for Black and Brown communities. Most of us are aware of the boiling water advisory that was issued last Tuesday night in Pittsburgh, and has since been lifted. This advisory affected 100,000 Pittsburgh residents, mostly in the central and eastern regions of the city. The neighborhoods affected ranged from wealthier, predominantly white areas such as Shadyside, Squirrel Hill, and Point Breeze, as well as lower income, predominantly Black areas like Homewood, Larimer, and the Hill District. However, while wealthier white residents may have been concerned about the water for a day or two (assuming they do not already have high-end filters installed), living with undrinkable water is a daily reality for the city’s predominantly Black residents of Color.

Black and Brown activists in Pittsburgh have been fighting for environmental justice for years, and it only just now seems to be receiving attention because wealthy, white neighborhoods are affected too. The Pittsburgh Public School district tested water at each school location a few months ago, and found high levels of lead in 14 water fountains and 141 of the samples. The highest levels were found at Langley K-8 School in Sheraden, with one sample from the school testing 11 times higher for lead than the safety levels. Students at Langley are predominantly Black children, with 89% of the student body eligible for the free lunch program. As is customary for the historically racist city, Pittsburghers did not respond to the information about lead in Pittsburgh Public School water fountains with the same urgency as it responded to this recent “flush and boil” advisory. Maybe if white kids at Shadyside Academy or Winchester Thurston were being poisoned from unsafe water, we would see a little more outrage.

On January 20th, WTAE Channel 4 Action News reported that Pittsburgh water was still testing high for lead. Nine days later, they reported that legionella bacteria was found at the VA Medical Center, which was traced to the water. In October, Mother Jones described the private water company that further corrupted Pittsburgh’s water supply. The entire process that the private company, Veolia, took with the Pittsburgh Water and Sewage Authority (PWSA), was dangerous. It risked public safety by deciding to cut costs where they were most needed–keeping the metals in our old pipes out of our water supply. Despite efforts to placate concerned Pittsburgh residents following the boiling water advisory, the Pittsburgh City Council has asked the state “to look into contracts that the PWSA holds with Veolia and outside contractors.”

The privileged residents of Pittsburgh might look at this information with fear and surprise. It may appear as though the reassuring distance between ourselves and the news stories in Flint is narrowing. However, this is not news to our Black and Brown neighbors. Murky, suspicious water, health problems due to poor air quality, and unethically placed hazardous waste disposal plants have been their reality all along. It’s time for white folks to wake up and put in the work to make our city truly liveable.

Mollie March-Steinman is currently self-designing an Economic Justice major at Chatham University. She is passionate about promoting peace and justice for all. Mollie is an intern with the NewPeople Editorial Collective.