Senator Warren Rejects Betsy DeVos and You Can, Too! 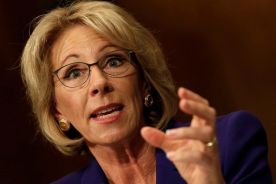 On January 17th, 2017, Senator Elizabeth Warren (D-MA) grilled Secretary of Education nominee Betsy DeVos on her lack of experience and inferiority within the field of education. Warren expressed concerns about DeVos’s ability to tackle the responsibilities she would have regarding higher education in the U.S., noting that DeVos would “essentially [be] responsible for managing a trillion dollar student loan bank and distributing thirty billion dollars in Pell Grants to students each year.”

Warren blasted DeVos with a succession of pertinent questions asking: “[have you had] any direct experience in running a bank?…Have you ever managed a trillion dollar loan program?…How about a billion dollar program?”

DeVos’s responses were telling. After each pressing question posed by Warren, she simply answered, “I do not.”

As if her blaring ignorance and inexperience are not enough, DeVos wants to make it harder for students to prove that they were sexually assaulted on campus. DeVos also disapproves of Affirmative Action with regard to the college admissions process. Personally, she has donated to organizations that advocate for conversion therapy, a detrimental and violent form of therapy focused on LGBTQAI+ youth. It is absolutely imperative that we prevent Betsy DeVos from becoming the next Secretary of Education, as these issues affect individuals at all levels of education.

If you want to fight back against her impending confirmation, check out this post that has been circulating on Facebook recently:

“The vote to confirm Betsy DeVos as Sec of Education was delayed. The hearing of the Senate Committee on Health, Education, Labor and Pensions will now be held at 10 a.m. Jan. 31, according to an advisory from the committee. Please consider calling one of the following Republican Senators (key in the confirmation vote) to express your opinion on the appointment. At least 3 of these need to be convinced in order to block DeVos’ nomination. Don’t email. Don’t tweet. Call them!

Make a difference and give these senators a call- there has never been so much at stake.

To watch the C-SPAN recording of Warren’s questioning of DeVos, click here.

UPDATE (2/3/17): All Democratic senators and Senators Susan Collins (R-ME) and Lisa Murkowski (R-AK) either have voted or plan to vote against DeVos’s confirmation.
Jacqueline Souza is an intern for New People and also studies sociology and journalism at the University of Pittsburgh. She is interested in racial justice, social movements, and U.S. politics.