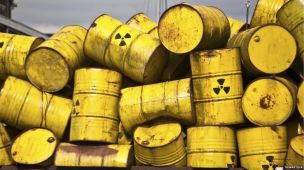 On February 17th truckloads of highly radioactive liquid waste may begin their journey along public highways, from on the edge of Lake Ontario and the Niagara River in Ontario to South Carolina.

A federal lawsuit filed by the Sierra Club and dozens of environmental groups had sought an injunction, demanding that an Environmental Impact Statement (EIS) be produced, published and circulated. In response, the Department of Energy postponed the first shipment.

The DOE stated that it was withholding shipments until after February 17, 2017, “in order to ensure compliance with all legal and contractual obligations” – in other words, until the federal judge has had the opportunity to rule on the merits of the lawsuit.

The liquid in question is now stored in a large double-walled tank called FISST (Fissile Solutions Storage Tank) at Chalk River, Ontario, containing 6000 gallons of an intensely radioactive and highly dangerous acidic solution, including a variety of radionuclides created when uranium is irradiated in a reactor. The liquid also contains a quantity of weapons-grade Highly Enriched Uranium (HEU) – essentially the same material used in the Hiroshima Bomb.

“Nuclear authorities in both countries have disguised the true nature of this liquid waste by calling it Highly Enriched Uranyl Nitrate Liquid (HEUNL)” said Dr. Gordon Edwards, President of the Canadian Coalition for Nuclear Responsibility. “In fact uranyl nitrate is only one of dozens of radioactive compounds in the liquid, and that liquid is more than 17,000 times more radioactive than the uranyl nitrate alone. Such high-level radioactive liquid has never before been transported over public roads anywhere in North America.”

Safer, faster and cheaper ways of dealing with the waste exist. “There are 20 other tanks of liquid radioactive waste at Chalk River, whose contents are being solidified and stored on-site as solid waste,” said Dr. Ole Hendrickson of the Concerned Citizens of Renfrew County, Canada.

Plans call for shipping 100 to 150 truckloads of liquid waste, over a period of several years, from Chalk River, Ontario, to the US Department of Energy’s Savannah River Site in South Carolina, along secret routes with heavily armed guards. The ostensible purpose is to “repatriate” the US-origin weapons-grade uranium to avoid any chance of its use in nuclear weapons, according to a program launched by President Obama in 2009. However, it was never originally intended to ship the material in liquid form.

Tom Clements, Director of Savannah River Site Watch in South Carolina, observed that “the safest and cheapest way to address proliferation concerns is to eliminate the weapons-grade uranium at Chalk River by down-blending it, leaving only low enriched uranium (LEU), which is not nuclear-weapons-usable material.

In February 2016, Indonesia was given permission to down-blend its stock of US-origin liquid weapons grade uranium to avoid transporting it back to the USA. The Indonesian down-blending operation is already completed.

Molly Rush is a co-founder of the Thomas Merton Center.