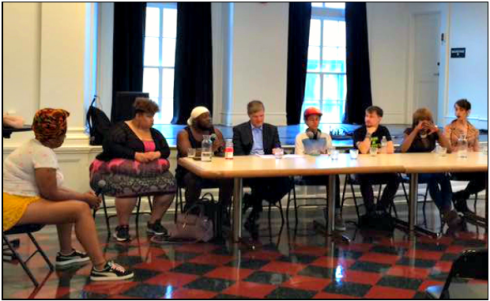 What would you do for freedom?

That was the theme of 2016’s Roots Pride celebration. The weeklong series of events urged members of Pittsburgh’s LGBTQIA+ community and their allies to envision what freedom looks like – for the entire community, not just the white gay men who are often at the center of the Delta Foundation’s larger Pittsburgh Pride.

The organizers behind Roots Pride wanted to remind the Pittsburgh LGBT community that pride is political, so they planned their own alternative Pride Week as “an intentional celebration of diversity across the entire spectrum of race, class, gender, orientation, and ability in the LGBTQIA+ community.”

Roots Pride was created last year in protest against Delta Foundation after they hired Iggy Azaela to headline Pittsburgh Pride despite her racist comments. Delta has also been criticized for accepting large payouts from ticket fees and corporate sponsorships, but using none of the money to support marginalized groups like homeless LGBT youth.

Roots Pride 2016 kicked off with a town hall meeting in East Liberty’s Ace Hotel. The diverse panel included people like Tate Hurt, a black agender (non-binary identity) artist who spoke about the lack of mental health resources available for youth, and black transgender woman Aria Lynn Copeland, who voiced concerns about the healthcare system. Aria said, “I still can’t find affordable health insurance. I can’t go to the doctor. I can’t go to the dentist… Pittsburgh doesn’t see that issue.”

Michael David Battle, Founding Director of the Garden of Peace Project, discussed youth homelessness. “The average age of a black trans kid getting kicked out of their home is eleven… those kids are living in isolation,” said Michael. “They’re the kids that are couch surfing with their friends, living under bridges, sneaking into bars. These kids are dropping out of school on average in sixth grade – they don’t even have a middle school education.”

Another big theme was lack of representation on Delta’s board and other mainstream Pittsburgh LGBT nonprofits. According to Michael, “There’s not one LGBT organization in Pittsburgh led by a queer person of color – besides Garden of Peace Project and New Voices, and we both started those organizations. We’re not there because people in power wanted us there, we’re there because we started them.” Panel member Celeste Smith added, “If they’re going to be making money off of oppressed people, there has to be one of us at the table.”

Panel members expressed a collective distrust of politicians – Democrats and Republicans alike. Aria asked, “What is politics doing for me? Why am I voting for you if you’re not doing anything to help anyway?” Transgender activist Ava Grace noted, “This bathroom bill is all that anybody is talking about. When can we go back to discussing homelessness? When can we go back to discussing employment?”

The panel also included white cisgender allies, Billy Hileman, Vice President of the Pittsburgh Federation of Teachers, and Joseph Onstott, member of the Allegheny County Jail Health Justice Project. Joseph spoke about his experiences with friends who are unaware of these problems, and said, “Not everybody’s going to see the issue when they’re surviving just fine… Organizations that are in control try to sweep it under the rug.”

In addition to the town hall meeting, Roots Pride also included social events like a barbecue, giant water balloon fight, and the “Rally and Party,” which combined protest with poetry, music, and dance. This event provided the fun you would expect from Delta’s “Pride in the Street” event, but for a $5-25 suggested donation instead of Delta’s $45-80 pricetag. Attendees danced the night away with friends to local musicians and DJs, and sipped signature “Politi-pride” cocktails.

Despite the party atmosphere, activism was still a major theme of every event. “Pride is a commemoration of a resistance,” organizer Joy KMT said. “We celebrate the fact that we’re here, that we’re alive. And as we celebrate, we must also remember that there are many in our community [who] are still resisting to survive, and if we don’t do that then our celebration is incomplete.”

“To be honest, I don’t care about Roots Pride as an ‘organization’,” said Joy, “But I do care about organizations and nonprofits taking the energy of the community, all of the work we put in to create truly inclusive and truly healing and truly revolutionary spaces in Pittsburgh, and using it to further agendas that may or may not have the best of intentions… I care about all of us out here struggling for a voice, a house, a bed, some food, to be seen, loved and honored for who we are.”

Angelica Walker is an intern for The New People covering LGBTQIA+ rights and criminal justice reform. She is a junior at the University of Pittsburgh studying social work, legal studies, writing, and political science.