I’ll Tell You What Girls Want – What We Really, Really Want: Gender Bias in STEM To End 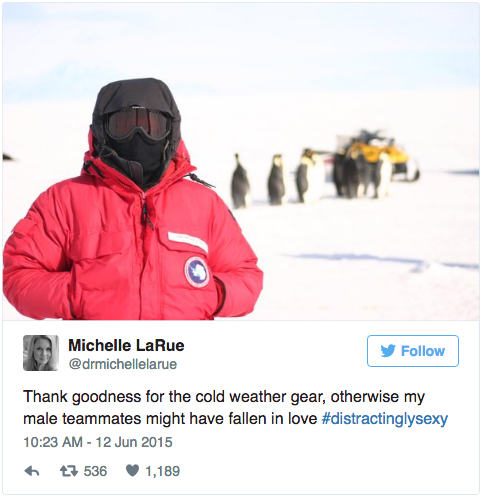 A tweet from Michelle LaRue, under the #distracinglysexy hashtag after Nobel Prize winner Tim Hunt, explained his “trouble with girls” in the lab, which included “they fall in love with you.”

Hey hey hey hey everyone! If you’re reading this, Equal Pay Day for women has probably just passed in the last few weeks, and you’ve probably been reminded of the strides women have made in terms of equity in the United States within the past 50 years. Although our current technology has evolved and outshines much of the futuristic advances predicted 50 years ago, apparently gender attitudes haven’t quite gotten there yet.

That’s right folks, even though the products that run our daily lives are clearly made in the 21st century, there are still views on gender in regards to women in scientific fields that scream “Hi, I’ve clearly not accepted that this is not 1625, and women are people, not things”.

Don’t believe me? A 2015 study “Can Evidence Impact Attitudes? Public Reactions to Evidence of Gender Bias in STEM Fields” by Corinne A. Moss- Racusin et al. found mixed attitudes to the notion of gender equality. In this experiment, over 800 written comments made by members of the public were analyzed in regards to articles which reported the gender bias of science faculty members. Most of the comments acknowledged gender bias, with many negative and positive comments emerging from the experiment.

It’s not exactly a secret that STEM (Science, Technology, Engineering, and Mathematics) fields don’t give women enough credit. After all, I’ll bet you didn’t know that a woman’s “immortal” cancerous cells have been growing in culture since the 50s and are responsible for most of the papers on cell research today (thanks Henrietta Lacks), or that female lab assistants found both the basis of DNA and the zebrafish organizer (Rosalind Franklin and Hilde Mangold). If you just recently enjoyed a photo of Mars on your laptop – you have some women to thank then. Some of the first primitive computer code was written by a woman (Ada Lovelace), and one of the first cosmonauts for the Soviet Union was a woman (Valentina Tereshkova, who also became a politician).

Obviously, women are pretty cool and could clearly dominate the world. But why, if women have been the foundation to so many STEM fields, are they rarely a part of the conversation? Hasn’t our society progressed enough that men and women should be equal by now? Why are we still having this conversation? Apparently, it’s because sexism is to STEM fields what crying midday is to college students during finals: an unspoken and built in trait.

Because women are often told to “get over” this whole societal hatred of our gender, Moss-Racusin et. al, chose a paper they had previously published in 2013 which documented the inherent sexism in faculty members for their study. In their 2013 paper, they found that women with the same resume as men would not receive the same objective view of their application; men were also offered almost $4000 more as part of their salary for the same qualifications. Moss-Racusin et al. circulated the paper and analyzed the comments which were left in response.

433 comments were negative, ranging from disparaging comments about women to comments by women against men, and strangely, comments criticizing the research methods. Perhaps one of the more interesting and unnecessarily sexist comments stated that men were more preferable to women because “women get pregnant.” If you can still see straight and aren’t in a blind rage after that, you’ll be happy to know that 754 comments were positive, acknowledging that gender bias does still exist on all points of the spectrum. The positive comments noted that some readers recognized their inherent biases after reading the article, thanking the researchers for the study, and realized that the gender gap was real. Analyzing the comments, the researchers found that there is still bias in how members of the public (no matter their gender) approach sexism in STEM fields.

Okay, so establishing what we already know about sexism in science is nice, but what does it mean? Well in the grand scheme, it points towards broad implications of our society not being as progressive as touted. With women’s right being the center of nearly every political issue, fair and equal pay becoming a larger part of our nation, and more women pursuing scientific fields only to be greeted with prejudice, we have to become accountable as a nation.

Much of computer programming was filled with women until the mid 1980s when more men became interested and shut women out. An interesting phenomena notes that as more women are in a field, the pay for the job decreases. If men want to protect pay and the “integrity” of the field, why not challenge the damaging attitudes of those within the field already and create a less hostile environment for women? Perhaps men are scared of becoming a minority and being treated the way women are; perhaps the men and the women in these areas want to feel elite. In any case, it must change for posterity in order to progress. The findings of Moss-Racusin et al. while unfortunate are not shocking, but hopefully with more research and increasing efforts towards a gender balance, these attitudes will change and women will gain the respect they deserve.

Maybe screaming “Girl Power” a la the Spice Girls from every science building won’t change gender attitudes, but acknowledging bias and working towards a positive solution can. Given our persistence and the contributions we can make (and have made), women can’t be shut out of scientific fields forever. Afterall, Beyoncé did say, “who run the world? Girls”.

Nijah Glenn is a third year biology major, a TMC intern, and a member of the NewPeople Editorial Collective.

Tagged as: A: Nijah Glenn, feminism