Ten years ago, staff at the East End Community Thrift compiled a history of the store, archiving documents and photos of the shop’s journey in a lovely album. We’ve lifted the introductory words written in that little book for use in Thrifty’s 20th birthday celebration because they are still true and relevant all these years later: 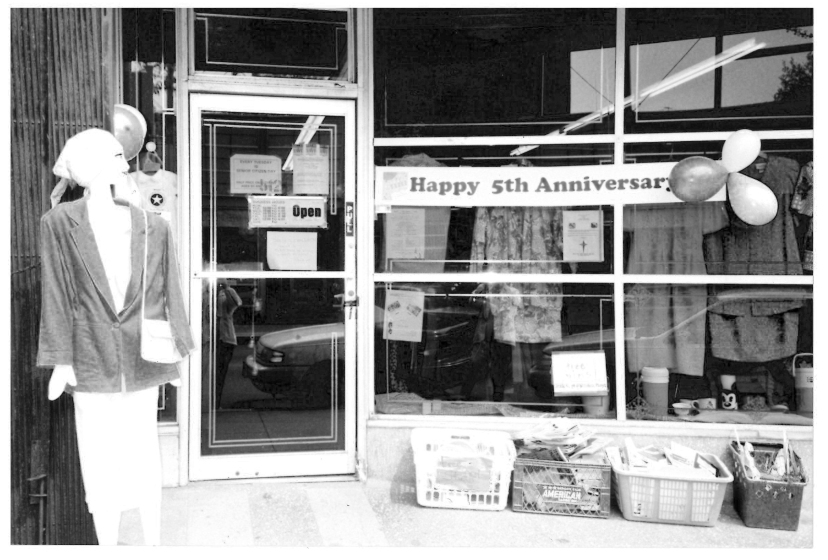 Thrifty is celebrating its 20th year of life! This remarkable place is a labor of love, its breath drawn from a concert of generosities, its success the communal success of many, many hands. When we look at these hands, we see that they are both young and old, and of different colors. We see that they are attached to the bodies of people who live all over the Pittsburgh area, people with assorted religious beliefs, and varying lifestyles. Diversity is a reality at East End Community Thrift, not solely an objective. To top it off, the daily struggles inside 5123 Penn Avenue, the struggles with hangers, over-stuffed donation bags, shoppers and fellow workers, transpires within an environment of respect and love and peace…. Save for the occasional piercing scream, exhausted groan or crashing shelf of glassware! Truly remarkable!

The shop, a project of the Thomas Merton Center, has been likened to a working model of the world TMC members strive to realize. As Gandhi suggested, “The means are the end in the making.”  For twenty years the profits of the East End Community Thrift have been vital to the Thomas Merton Center’s operating budget – a means to another great end. But most importantly, its existence has been, and continues to be, an invaluable sustaining resource for the Pittsburgh community for 20 wonderful years.

You have certainly stood the test of time!

Colleen Dougherty is a volunteer at Thrifty and a supporter of the Thomas Merton Center.