TERFs are the Worst: An Intro to Anti-Trans Feminism 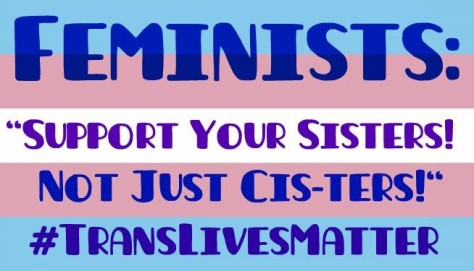 Feminism is one of the largest social movements in the world. Naturally, because of its scale, it is also one of the most problematic. Since the beginning of the suffragist movement, people identifying as feminists have actively fought against a whole slew of groups, including women of color, women who like to show off their bodies, women who choose to cover up, women who have too much sex, women who don’t have enough sex, religious women, stay-at-home moms, and more. Today, it’s even harder to define exactly what feminism is. Many have argued that all women (or all people) should be feminists, as long as they want to be equal to men – but it’s pretty clear to me that identifying as a feminist often means something very different than believing in “equality.”

One of the fastest growing groups of problematic feminists are known as TERFs, or Trans Exclusionary Radical Feminists. Depending on the radicality of the group, some even change the “E” in TERF to “eliminationist” or “exterminationist.” These women, who often identify under the moniker of “RadFems,” argue that transgender women are a major threat to cisgender women everywhere.

After a transgender woman from Alaska, Nattaphon “Ice” Wangyot, won a third-place medal at a varsity track competition, TERFs misgendered and insulted her in the name of feminism. Despite the fact that Ice has openly identified as trans since she was 10 years old, one member of a group called RadFem Collective said, “Just look at that smug little grin on his face. He loves his male privilege. Fucking narcissist.” Another asked, “How long until we return to the days of Shakespeare and all theatre parts are played by men?”

Let’s get one thing straight: the very fact that TERF groups exist just goes to show that transgender women need our support. They are consistently shut out of the very groups you would expect to support them; not just feminism, but the LGBT community as well. Even in states where same-sex marriage and other anti-discrimination laws exist, transgender folks can legally be denied jobs, housing, and more, because of their gender identity.

This often leads to unemployment, poverty, lack of healthcare, homelessness, substance abuse, survival sex work, suicide, and many other dangers. Worst of all, they are often denied access or scared away from homeless shelters and other organizations that claim to help people. Transgender women make up almost 3 in 4 hate-crime murders, and are seven times more likely to experience physical violence when interacting with police.

In almost all cases of men having privileges over women, transgender women are even worse off than cisgender women. To say that these women have “male privilege” that they should be ashamed of is straight-up ludicrous.

If your feminist group doesn’t have any trans women or women of color, ask yourself why. It’s not enough to just say you’re intersectional; it’s time to actively work to create spaces where *all* women feel comfortable, safe, and included. Don’t claim to be fighting for “women’s rights” when you’re really just fighting for your rights.