Speaking Truth to Power: A Tribute to Muhammad Ali 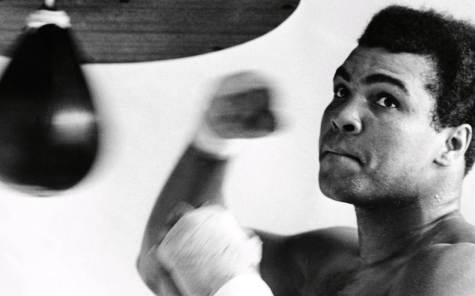 Our heroes of the past half-century are gone – all but Fidel.

Malcolm X, Martin Luther King, Nelson Mandela, and now Muhammad Ali. To be sure, there are many less celebrated heroes and heroines fighting against oppression in the trenches of the world, and I take nothing away from their courage. But these four informed the political and personal development of millions of people, black and white, who were inspired by their words that rang out to all humanity. They illuminated a beacon of truth and integrity, compassion and steely resolve that shown throughout the world. What a foursome: Malcolm X, the ex-prisoner turned Muslim; Martin Luther King, the Christian reverend; Nelson Mandela, the South African lawyer turned revolutionary; and Muhammad Ali, the greatest heavyweight champion of the world and trash-talking poet.

The early 1960’s were tumultuous times as protests, sit-ins, demonstrations by black and white Americans demanding an end to segregation, (i.e. the right to vote, to obtain jobs, to attend public schools, to sit at restaurant counters, to use public bathrooms, to sit anywhere on public transportation) swept across the southern states. They were shot at, spit upon, hosed, beaten with clubs, incarcerated, set upon by dogs, lynched, murdered, assassinated.

In 1963 250,000 people marched on Washington for jobs and freedom, the largest demonstration for civil rights ever. Less than a month later, three Klansmen blew up a church in Montgomery, Alabama, killing four little girls.

At the same time, the American military buildup in Vietnam accelerated.

Shortly after, he ditched his “slave name” (Cassius Clay), joined the Nation of Islam and became Muhammad Ali. Two years later the Draft Board reclassified him to 1-A status making him immediately qualified for enlistment. On April 28, 1967, while bombs rained down upon Vietnam and only 37% of Americans believed the Vietnam War was a “mistake,” Ali refused to be inducted into the army, saying “I ain’t got no quarrel with those Vietcong.” He was convicted of draft evasion, sentenced to five years in prison, fined $10,000 and banned from boxing for three years. They even took away his passport so he couldn’t fight outside the country.

Ali never went to prison. In this fight, the Supreme Court awarded the decision to Ali, as riots in poverty-stricken inner cities throughout the north consumed black communities. He explained the government’s attempt to shackle him this way: “They did what they thought was right, and I did what I thought was right.”

By 1970 the Black Panther Party had emerged, hoisting slogans like Black Power and Black is Beautiful and monitoring police officers in black communities.

Ali lost three prime years of his boxing life, returning in October, 1970 to re-establish his dominance in the ring. Ali retired in 1981 with a record of 56 wins out of 60 fights. He won the Heavyweight Championship an unprecedented three times.

The “Louisville Lip” went on to help shape black poetry, influence the birth of rap music, author several best-selling books and act in movies – all this as Parkinson disease crept to the center of the ring.

How do we take the measure of heroes? By the might of their enemy? The enormity of the price they paid? How they handled themselves while staring down the opposition? Was consciousness changed because of their actions? What was their impact on the world?

Muhammad Ali was a hero. He was a proud black man who stood up to the “man” and won. He influenced millions around the world. As Rabbi Michael Lerner said at Ali’s funeral:

“The best way to honor Ali is to be Ali.”

Tagged as: A: Linda Nordquist, Memorial, Previously published in paper